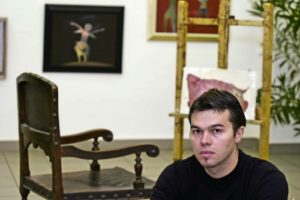 Felix Aftene’s artistic expression seeks its richness in various sources, sometimes apparently conflicting – it stands for a vast field of plastic culture, for a certain elasticity and dynamics specific to the contemporary artist. Painting and most of all graphics represent the privileged languages, but Aftene experimented with other means of structuring the artistic message too, such as performance. Occasional resorting to local inspiration sources like the Romanian Christmas Carols, the accessories of the protagonists taking part in these music-and-dance mini-shows, do not impede his access to the international stage, on which he has already stepped.

The rather generic human presence, endowed with myths, making its way through life, hesitating between spiritual and bodily pleasures, building worlds torn between dream and reality, crossing perils, hunted by damnation and capable of resurrection, in a word – Man, is an essential point of Felix Aftene’s work. It is all about an anthropocentrism around which the animal and the plant kingdoms gravitate and which is watched by the “cardinal points” of the primary elements. Animals may become friendly or menacing phantasms, the individual imaginative world and the complex, cultural one determining their shapes.

In its intimate substance, the Romanian artist’s work “sails” unrestrictedly from real to fantastic and from figurative to abstract. Aftene builds communication bridges with a tradition connecting Bosch with the surrealists, but which also goes deeper, to the much older sources of the Afro-Asiatic civilisation-founding cultures. Up from the postmodernist promontory one can have a view on the dialogue, rather than on the rupture within the history of art, but this, with binoculars which “cut” fragments and rearrange them freely, this process being defined by an awareness which disintegrates the absolute novelty canon.

Watching the individual or the grouped images created by this artist from Iaşi, one can notice their autonomy, even in the second case. Each one of them stands for universes as such, based on the relevance of the plastic symbol – anecdotic aspects are secondary/elliptical/omitted. “The foreground” is represented by the graphic or the pictorial element, or by the dialogue between the two of them. Displaying the pleasure of working with the coloured matter involves, beyond the visual perception, the stimulation of tactility. These signals originate both from the figurative compositions and from the abstract ones (lyrical, with possible biomorphic or geometric stress; sometimes, these two directions coexist, and their symbolic potential is not overlooked either.)

Felix Aftene seems to be tempted by the freshness and the “bitterness” of a primitive-rendering discourse just as much as he is by the mastered elegance of a timeless mannerism. His characters are defined especially at the level of their attitudes and thus is born a kind of ideograms individualized by lines, shades of colours, value or chromatic quantitative/qualitative connections. From old Egyptian or Persian echoes to neoexpressionist emphasis, from filtered-symbolist reveries to the recall of Romanian traditions on minimal background and the discrete “accessing” of decorative temptations, from matièrisme to ludic-fantastic image “phrasings”, these secondary directions are part of the vital flow of Felix Aftene’s painting and graphics, these two fields of artistic expression communicating thematically and through the signs’ alphabet and complementing each other to form an impressive range of formal-chromatic possibilities.

Due to its very openness to several perception levels, to the generosity of the universe of ideas and to the diversity of the stylistic repertoire, Felix Aftene’s art meets a public unaltered by a singular taste option. Therefore we deal with a living creation in progress. Although beneficially crossed by underground continuities, it is not by far endangered by a monochord identity.